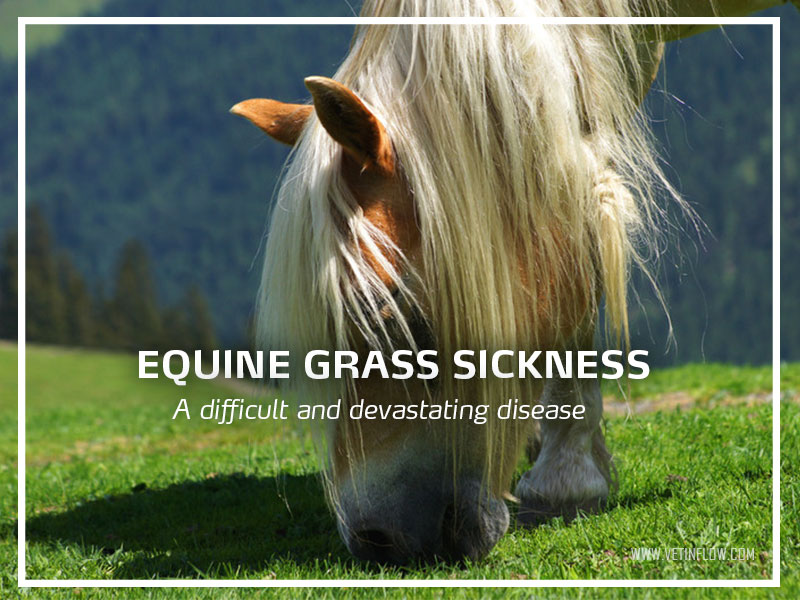 Equine grass sickness, also known as equine dysautonomia, is a debilitating and often fatal disease that causes a marked reduction of the gastrointestinal motility due to damage to the autonomic nervous system.


This condition was first recognized in 1909 in Scotland and it is seen throughout northern Europe and also South America. Great Britain has the highest incidence of grass sickness in the world and it affects horses, ponies and donkeys.


Grass sickness can occur at any age and at any time of the year but it has a seasonal pattern, with most cases being seen during spring time.


The cause of this disease is unknown but apart from grazing, different risk factors such as certain types of wormers have been identified. However, not worming a horse can have very serious consequences as well, which means that owners should not decrease their use of wormers. Many potential causes have been examined over the years and the type of damage to the nervous system suggests that a toxic substance is likely to be involved.


Grass sickness occurs in three main forms: acute, subacute and chronic form. The clinical signs depend on the level of gastrointestinal dysfunction and severity of neuronal damage.


Both forms are fatal and affected horses are often put down once the diagnosis is made, in order to avoid unnecessary pain and suffering.


In the chronic form of grass sickness the symptoms develop more slowly. Horses lose weight and there are changes in their abdominal silhouette. In subacute and chronic cases their faeces may become dry, firm and present a black coat and mucus on them.


The prognosis of the chronic form is poor and approximately 45% of the horses will survive with treatment. Treatment is usually considered in mild chronic cases and if the horse is eating and not in too much in pain.


Since the cause of the disease is still unknown it is very difficult to take preventive measures. Stabling the animals during spring and early summer can reduce the likelihood of disease.


There is still a lot of research being done to find the cause of this condition, which would allow preventing it and treating it in a more effective way. The most recent theory being researched is the possible involvement of a soil-associated bacterium, Clostridium botulinum.

Read the previous article: Pets and Ebola  What do we know so far?