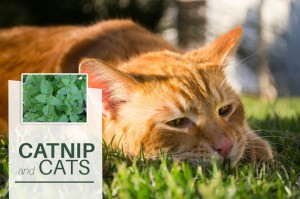 If you are a cat owner or a cat lover you have probably heard of catnip, an herb that causes behaviour changes in cats. Have you ever tried offering a catnip toy to your cat? How did he or she reacted? We would love to know!

Most cats will show some reaction to catnip. Cats can become very relaxed, roll and rub their face in the catnip toy, or simply stare into something we don't really know what it is. They can also become extremely friendly, vocalise more, start purring or start running around the house, sometimes appearing to pursue an invisible prey. Some cats can also become aggressive. Each cat will react in its own way, but it is generally thought that male cats will get more excited than females.

Catnip is an herb called nepeta cataria that belongs to the peppermint family and although scientists and researchers know that the active substance in it is nepetalactone, they don't really know what is it about nepetalactone that causes cats to react differently. The general theory is that nepetalactone mimics the effects of a cat pheromone, most likely associated with mating. When cats smell it, it triggers a neurological response, similar to how cats react to sexual pheromones.

Not all cats show reactions to catnip. Being sensible to the effects of catnip appears to be an inherited trait and about 70% of felines will display some sort of odd behaviour when they smell catnip. Similar responses have been observed in lions, tigers, pumas and leopards.

The behaviour changes caused by catnip can last between five minutes to an hour and once a cat has smelled catnip it will take a few hours until the cat is susceptible to the effects of catnip again. It has been found that kittens usually do not respond to this herb until they are about six months old. It has also been observed that cats will stop showing reactions to it as they get older.

Most cats love catnip and this herb can be very helpful! It can help anxious cats feel more relaxed and it can also be used as a way to encourage your cat to use a scratching post for example. Nowadays, catnip can be found in toys, in oil spray and you can even buy powdered catnip.

Owners can rest assured that the herb is safe for cats as its effects are short-lived and non-addictive.


Would you like to know more about cats? Check our Feline Courses: