Tips for owners that have more than one cat 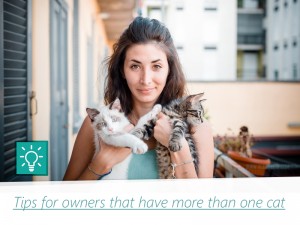 Cats are extremely popular pets and many owners will often have more than one feline companion in their household. However, not all cat owners are aware that their cats' social behaviour is very different from a dog's social behaviour and the impact these differences can have in their health and well-being.

Cat societies, weather we are talking about two cats or ten of them, are mainly composed of social groups. In the wild these groups are usually formed by females who are related to one another and that live together cooperating in protecting, feeding and caring for their kittens. Males will often be on the periphery of the group, breeding most of the females in their territory and rejecting other males in general. They keep their distance from other social groups and they do their best to avoid direct physical aggression.

This means that they don't have a hierarchical structure since they don't necessarily need to cooperate in order to survive. As a result, when owners try to keep more than one cat in the same home, social compatibility becomes an important issue.

While this avoidance behaviour often prevents more serious conflict it will lead to chronic stress and it can condition a cat's access to important household resources such as food, water or the litter box. A cat will actually drink less water if going to the water bowl means having to deal with a cat he or she would much rather avoid. Many house soiling issues can also be due to the lack of social compatibility among the cats in that area.

A common misconception among cat owners is that their cats get along because they will get together when you are feeding them. However, many cats simply tolerate other cats during that time because food is too important to dismiss.

Keeping all of this in mind, here are a few tips for homes with more than one cat:

Social harmony among all the cats in a household is key to prevent unwanted behaviours, chronic stress and future health problems.