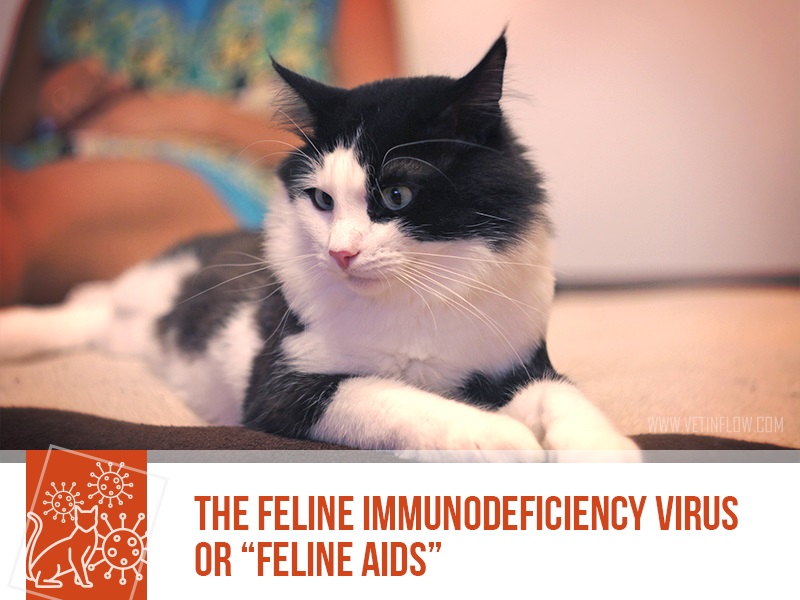 The Feline Immunodeficiency Virus (FIV) is type of retrovirus (a lentivirus) that affects cats all over the world. It causes an acquired immunodeficiency syndrome which means it interferes with our cats' immune system, lowering its defences, and causing them to be more vulnerable to opportunistic infections and other diseases.

The way this condition develops and its impact on the cat's body is quite similar to the human acquired immunodeficiency virus (HIV). For this reason, this condition is often referred to ("feline AIDS") and it serves as model for the study of infections with human immunodeficiency virus.  It is very important to highlight that despite the similarities between FIV and HIV, FIV only affects cats and cannot be transmitted to us humans.

After infection, the virus can be found in the affected cat's blood and saliva. This virus is transmitted among cats mostly through bites and fight wounds. As a result, adult entire male cats that have access to the outdoors tend to be most commonly affected. The virus can also be transmitted from infected queens to their kittens.

The Feline Immunodeficiency Virus doesn't cause very serious clinical signs initially. From the point of entry the virus goes to the nearby lymph nodes and starts reproducing, eventually spreading to other lymph nodes throughout the body. This leads to a generalised enlargement of their lymph nodes often accompanied by fever.

Some cats will deteriorate progressively after being infected, some cats may just present recurrent illness, needing veterinary care more often than non-infected cats, and for many cats the disease progresses to an asymptomatic phase, during which they don't display any signs of disease. This stage can last for several years.

Eventually, infected cats suffer a decrease in their immune surveillance and they will become more predisposed to other conditions, as well as secondary infections resulting from bacterial, fungal, protozoal, or parasitic infections.

Clinical signs of infected cats include loss of appetite, fever, poor coat condition, diarrhoea, inflamed gums (gingivitis) or mouth (stomatitis), skin problems, respiratory problems, conjunctivitis, immune-mediated diseases, neurologic conditions, and tumours. The most common tumour in these cats is lymphoma and they are 5 times more likely to develop them.

With proper care most cats infected with FIV are able to live many years and even die from other causes, in no way related to their FIV infection.

All cats should be tested for FIV. It is recommended to keep an infected cat indoors to prevent spreading this virus to other cats. This also protects FIV-infected cats from any secondary disease which can be very beneficial, given their impaired immune system. Any new cat being brought into your household should be quarantined and tested before being introduced to the other house cats.