Has your pet ever eaten something he or she wasn't supposed to? 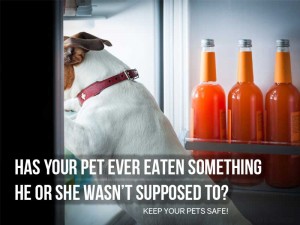 If there is one thing pet owners should keep in mind is to be careful with what their pets have access to.

Our pets can eat the most unbelievable things and in relatively large amounts. Vets know this very well as they are the ones who frequently treat these cases. That is why we wanted to share with you some of the stories from the "They ate what?!" contest.

This competition has been running since 2006 in the United States and showcases the unusual and often funny situations lived by veterinary surgeons and pet owners, when their pets decide to eat things they really shouldn't.

The X-ray that won first place in 2015 belonged to Zeus. Zeus is a one year old Doberman who loves to chase golf balls. Apparently Zeus also loves to eat them. When his owner noticed Zeus wasn't eating and not feeling quite like himself he took him to the vet. An X-ray showed this mischievous dog had swallowed 26 golf balls!

Among the extraordinary entries you can also find the X-ray of a cat who swallowed several small coins or Yogi the cat's X-ray that showed he had eaten more than 30 hair ties and other string-type objects. Danner, a 4-month-old male English cocker spaniel, was found by its owner "looking full and feeling crunchy". The poor dog's abdomen felt and sounded like a bag of rocks. It turns out the Danner had ingested 2.6 pounds of rocks!

Last year's entries of this competition are equally impressive. A 3-year-old Grate Dane ingested 43 and half socks and Cody, a 10-month-old golden retriever swallowed a light bulb. You can have a look at their stories and incredible X-ray's at:

Please be careful with what you leave lying around your pet. Although it doesn't seem to make sense to us, unfortunately many pets will eat unusual items!
Would you like to know more about cats and dogs? Check our Feline and Canine Courses:

Read the previous article: Looking after your horse during winter