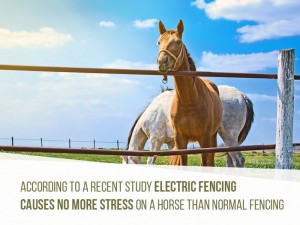 The use of electric fences to keep horses from escaping their designated areas or fields has become very common all over the UK. However, there are some concerns regarding the negative effects these electric fencing systems can potentially have on horse behaviour, causing chronic stress and reducing the use of the accessible space.

According to anew Swiss study, the researchers have found no evidence of stress in horses as a result of being contained within electric fencing. However, the study concluded that horses in electrically fenced and small paddocks would use less available area and were less likely to roll.

Twenty horses between the ages of six and eight-teen years old participated in this study and researchers measured their stress responses while they were kept in four different grass outdoor enclosures. These areas had two different sizes and were equipped with either wooden fencing or electric fencing. The smaller areas had 12.25 square metres and the larger areas had 36 square metres.

The horses were systematically rotated between the four areas, spending 90 minutes in each one. The scientist focused on quantifying any stress responses of the horses kept in these paddocks and during the experiments they recorded their behaviour on video so they could later evaluate their behavioural patterns and the use of the available paddock area. While on the different enclosures the horse's heart rates were measured and samples of saliva were obtained for cortisol analysis as well.

According to this study, there was no difference between the two fence types in the overall analysis of all the stress-indicating parameters and it did not matter whether the enclosed area was large or small. This means that based on the measured physiological parameters the horses did not display any more stress for being in an area with an electric fence than the ones that were on wooden-fenced areas.

However this study also showed that horses in the electrically fenced and small enclosures moved around less, using around 50 centimetres less of the available space (the border area). The horses in these paddocks were also less likely to roll.

This study shows the importance of the paddock's size for these animals, since horses that have space to move around and exhibit their normal behaviour are much happier.